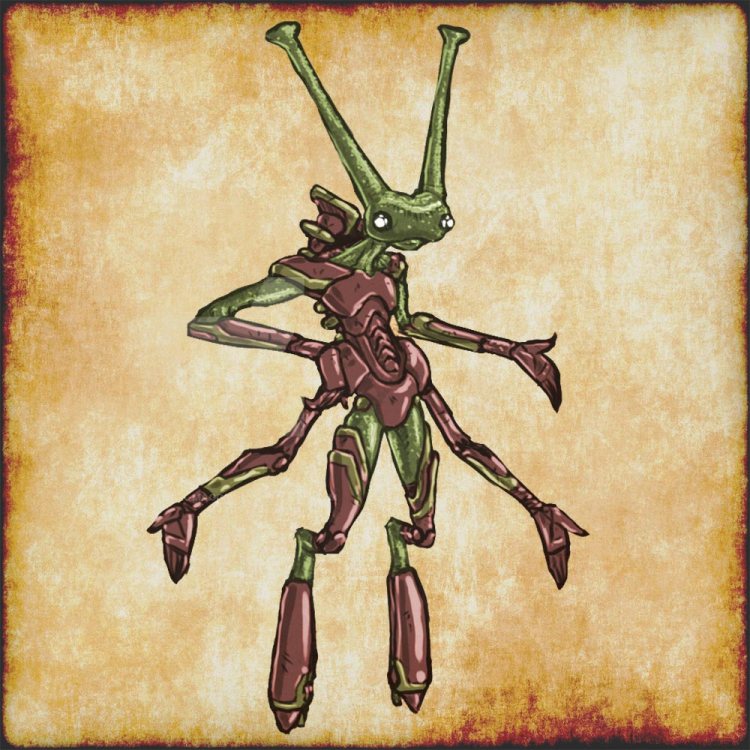 Dranits are a bipedal insectoid race native to the planet of Trell in the Andromeda galaxy. They live in hive-like colonies with a single reproducing queen and thousands of drones. Dranit hives are intrinsically hostile to one another and warfare is a way of life on Trell.

Dranits are a telepathic species, but only with respect to other members of their race and only at fairly short range. Individual Dranits are quite dim, making your average Ram Python seem quick on the uptake. Through their species telepathy, Dranits grow more intelligent when in proximity to one another. Whereas a single Dranit would have difficulty opening a soda can, a hundred Dranits could field strip a fusion reactor.

Their antennae are the focal point of their telepathy. If a Dranit damages or loses his antennae, he is cut off from the collective. These outcast Dranits often become suicidally depressed. Most will simply stare into space until they starve to death.

Although highly intelligent (in groups), Dranits are fairly low tech by Alliance standards. Their culture has tended to repeatedly rise to about the technological level of gunpowder before collapsing into chaos once again. They only appear to have exceeded this threshold once, as two nearby worlds have been colonized by their species. Archaeological investigations by Alliance teams indicate that this cycle of rise and fall has happened hundreds of times over tens of thousands of years.

Dranits make incredibly effective soldiers, their telepathy allowing individual drones to act as a single cohesive unit. Equipped with modern Alliance weaponry, they can be a terrifyingly effective murder machine on any battlefield. This is rarely seen, however, due to the race’s relative obscurity and the expense of bargaining for enough drones to make it worthwhile.

Dranits are highly xenophobic, mostly toward members of their own species from other colonies, but are at best suspicious of other life forms. Nonetheless, they are usually willing to trade, especially for technological materials. They are excellent miners and scavengers and usually have some random bit of salvage that nobody else has.

Dranits share certain physiological traits with insects and arthropods. Dranits have compound eyes, enabling them to see in all directions at once, although with relatively limited detail. They are covered in what appears to be an exoskeleton. This is mostly vestigial as they are primarily supported by an internal skeleton. The outer carapace serves to protect the Dranit from cuts, scratches, and light impacts. Dranits have two sets of arms; the large upper pair are built for heavy lifting and brute force, while the smaller lower pair, with their multi-jointed fingers, are used for fine manipulation. Dranit antennae are about 30-40cm long and constantly flickering about. The antennae of queen Dranits are much longer, thicker, and branched at several points, implying possibly that she has a greater range or strength to her telepathy.

Dranits typically stand between 190 and 220 cm tall. Their coloration is highly varied, and appears to have little to do with their function or hive. Much like Earth ants, drones are all sterile. Only the queen, and a few short-lived males born at special times of the year, are capable of reproduction. Individual drones live only about 20 years, while queens can live for centuries.